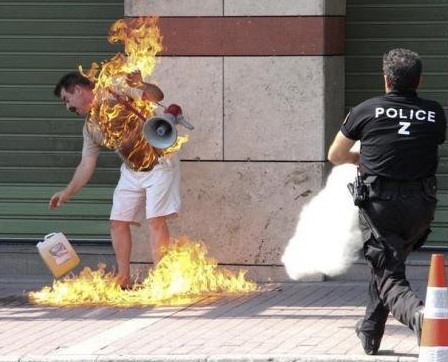 A member of Atlanta's new "Police Z" tactical division arrives to extinguish a man who had just set himself on fire on a downtown sidewalk. Self immolation has been on the rise among fans of professional sports in the southern city in recent years, as the Braves, Falcons, and Hawks leave little to cheer about. The new police division is a first in the US and patrols primarily around the stadiums where the teams play, as over one hundred such acts were reported in 2011. "If coaches and ownership can't light a fire, maybe we can," stated Jerry Cincella, 43, who ultimately survived this incident. (Associated Press)