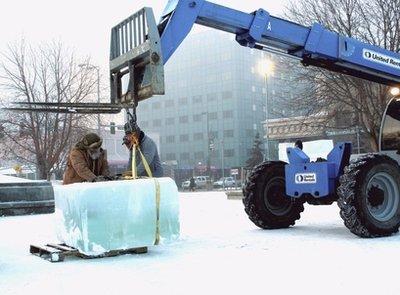 Workers remove an ice block that had fallen from the sky in Anchorage, Alaska, on Friday, Jan. 7, 2011. The estimated 2.5 ton block landed in the Town Square, nearly crushing a wooden pallet that had been left behind just minutes before by a local merchant selling snow cones during lunch hour. Alaska has been hit by large blocks of ice from the sky for centuries now, which scientists believe is the result of millions of snowflakes banding together for malicious and destructive purposes. (Associated Press)