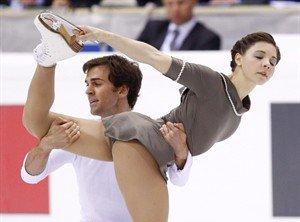 Researchers at the University of Minnesota were at a loss recently while trying to determine why all male ice skaters were gay. "I mean, c'mon, look at this kind of opportunity, and it means nothing to him," stated Karl Felder, Professor of Psychology at the university. Experiments may begin soon that would allow the male counterparts in mixed pairs skating to forego wearing skates and instead just shuffle around in some sort of spikey shoes, grabbing and holding the girls when necessary. "This would allow us to determine if the act of skating, with all of its grace and beauty, contributes in any way to a young man becoming gay instead," Felder added. (Associated Press)