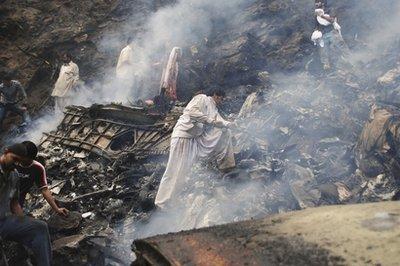 Pakistani rescue workers look for survivors in the wreckage of a plane that crashed in Islamabad, Pakistan on Wednesday, July 28, 2010. A government official says all 152 people on board the plane that crashed in the hills surrounding Pakistan's capital were killed. "It's not so much a search for survivors, really," one official stated, "because if we do find anyone alive they still have to live in Pakistan, which is worse than dying." (REUTERS)