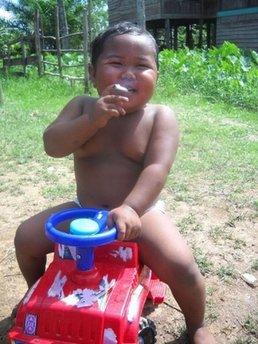 Two-year-old Indonesian boy Ardi Rizal smokes on a cigarette in the yard of his family home in a village on Sumatra Island, May, 2010. The boy -- who smokes about 40 cigarettes a day -- will have specialized treatment next week to wean him off his habit, officials have said. "He will no longer be allowed to work at his job making Nike shoes, which supported his two packs a day habit," one official revealed, "and local merchants within his walking distance have agreed to stop selling cigarettes to him immediately." (REUTERS)