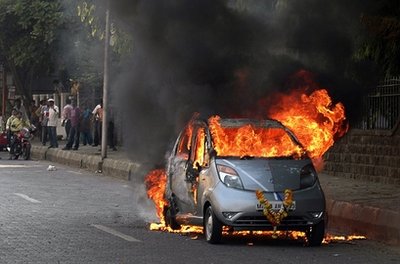 Mumbai, India (AP) - A brand new silver Tata Nano, heralded as the world's cheapest car, burst into flames shortly after Satish Sawant, a software engineer, proudly drove the car home from the dealership showroom, still draped with a celebratory garland of marigolds. On Monday, Toyota placed an order for 30,000 of the cars, stating that, "a car bursting into flames is much more exciting than a gas pedal getting stuck." Toyota will convert the car into a hydrogen hybrid and rename it the "Phoenix." They are expected to hit showrooms by the third quarter of 2011.