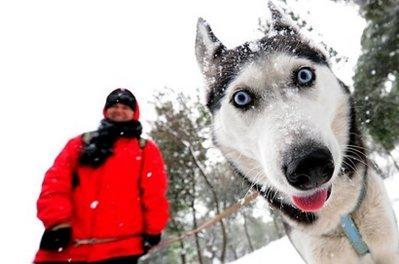 A husky signals distress to a photographer during a "walk" in a St. Paul park recently, in which the dog was apparently riding a very short, tight leash, had no boots or footwear of any kind, and had to relieve himself in snow too deep to keep his thing from actually touching the snow. Authorities later arrested the dog's owner, Rhonda Giuffre, and charged her with negligence and cruelty to animals. (Associated Press)