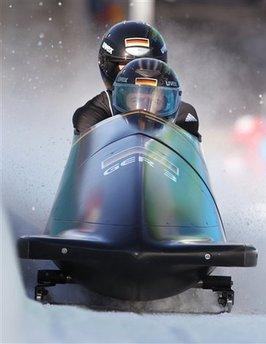 Germany's GER-3, piloted by Karl Angerer, front, practices during a training run for the men's two-man bobsled at the Vancouver 2010 Olympics in Whistler, British Columbia. The German sled is powered by a three-liter BMW engine capable of 280 horsepower, and is expected to bring home the gold. The American entry is powered by a Chevrolet V-6 that is far less powerful, but is expected to get nearly 40% better gas mileage. (Associated Press)