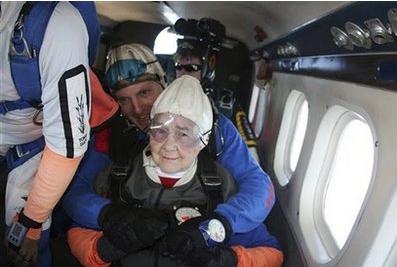 In this September 19, 2009, photo released by Jumpdown, Jane Bockstruck, front, sits with her sky diving "instructor" Paul Peckham before jumping from an airplane over Orange, Massachusetts. Bockstruck, 92, a resident of Swanzey, NH, had been suffering from a variety of ailments and her family had decided "it was time." The family told her she was going to Disney World.(Associated Press)