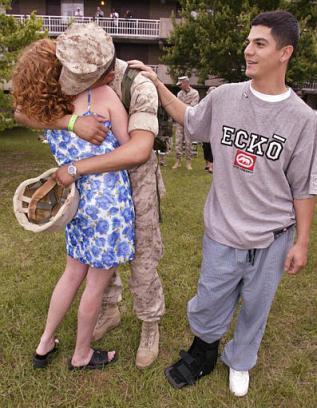 Marine Lance Cpl. Robert Torres, center, from Decatur, Texas, embraces his friend?s wife Denarae, left, as he gets a pat on the back from her husband Cpl. Carlos Paredes, right, Saturday, May 17, 2003, at Camp Lejeune, N.C., after Torres and other members of the 2nd Force Service Support Group returned from deployment. Torres, unmarried, was allowed to hug Paredes? wife as part of a friendly gesture between the two soldiers. ?He doesn?t have a woman in his life right now,? Paredes said, ?So I thought he could use one of those classic ?returning from war? embraces.? (Associated Press)