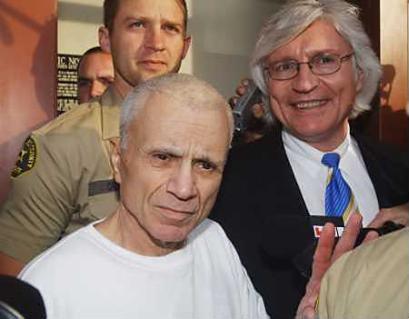 Actor and murder defendant Robert Blake (L), shown with one of those freaky, long-haired LA attorney types, is released from the Los Angeles central jail, March 14, pending trial for the shooting death of his wife. Blake, who posted a $1.5 million bond, is charged with murder and other crimes stemming from the May 4, 2001 attack on Bonnie Lee Bakley, who was mortally wounded as she sat in her husband's car near a restaurant where the couple had just dined. It is unclear at this point if Blake plans on remarrying and killing again before his trial begins. (Associated Press)