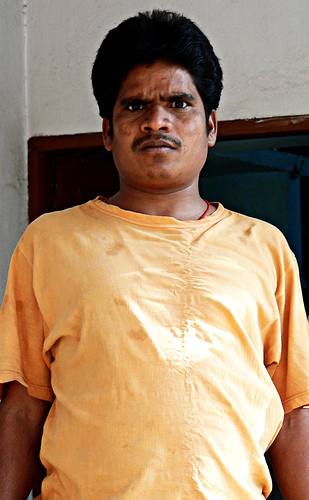 Leisure Village, NJ (AP) - In a shocking discovery, yesterday, Fareed Ranjan, of Leisure Village, New Jersey, accidentally clicked on what appeared to be an innocent ad for teeth whitening. But instead of seeing a site designed to sell dental products, Ranjan was treated to more than just a set of pearly whites.

The email was delivered into Ranjan's inbox at approximately 9:03 A.M. yesterday. The subject line stated, "Pretty Mouthes just 4 you."

"And when I clicked on it," Ranjan explained, "up popped a picture of a beautiful woman with bright white teeth. She sure had a pretty smile. It made me want to know what she used."

"Yeah, now that I look back on it," he said, "my first clue should have been that the woman was only wearing was black socks. Not a stitch more. And I guess I shouldn't have clicked on a penis either."

Clicking on that penis led Ranjan to a website that contained vile images he stated he "hadn't seen since the eighties."

"I smoked a lot of stuff back then and I did some crazy things." Ranjan shook his head before continuing, "I thought I hallucinated most of that stuff but it looks like people really do it. I mean, what are the odds that someone else would think of using a wooden leg like that?"

"I will say this for them internet people though," Ranjan continued. "They sure all had nice white teeth. Now I really gotta know what they used."