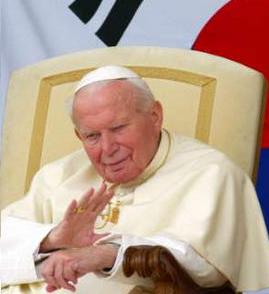 Some Tattoos Are Okay, Pope Says

Rome, Italy (UPI) Pope John Paul II, in a Wednesday release that stunned both members and observers of the Catholic church, classified several tattoos and tattoo themes as "acceptable" for Catholics to adorn their bodies.

The 82-year old Pontiff has been toying with the idea for years, advisors admitted, as the church struggles with declining membership and various image problems. "This was not a knee-jerk reaction by any means," stated Cardinal Richard Wojchiehowski of Cleveland, OH. "The Pope gave this long and critical thought," he added.

Priests and nuns will be allowed, of course, to add tattoos to their bodies under the new, relaxed standards. "The tattoo has always been regarded as desecration of the body that God gave us, a harmful reminder that Satan tempts us to change and turn away from God," Wojchiehowski said. "But the right tattoo is a good tattoo, and that can bring us closer to ourselves and each other," he said.

Some of the approved tattoos are:

Observers believe that the move will help to attract people in the all-important 25-40 year old age bracket.

Greensboro, NC (AP) A local dude's brother turned fifty-something yesterday, the dude thinks, as the dude is thirty-eight and his older brother is "about that much older."'