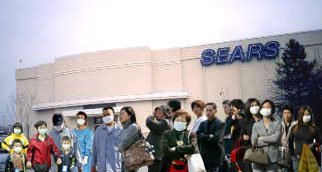 Chicago, IL (Reuters) - After the Associated Press released a misspelled Headline stating "SEARS Responsible For 100 Deaths", virtually every Sears in America and even some in foreign countries were boycotted and picketed within 24 hours.

Mary Johnston, organizer of the unprecedented boycott and author of They Got No Right, stated that she was simply appalled that Sears would go to such great lengths to cause so much harm. "It just totally enraged me," she said, "and I knew I had to do something about it."

Sears spokesman Jeff Lucent explained, "We contacted all the major new agencies right after the headline came out to try and get an explanation. We knew we weren't responsible but we were willing to offer our resources to find out who was responsible for the deaths."

Embarrassed, the Associated Press issued a statement: "We are deeply sorry for any inconvenience and financial hardship this may have caused anyone. We're not sure how this made it though our extensive editorial reviews before hitting the wire and we're looking into a possible personal grudge from one of our employees. In our defense, the headline did pass a spell-check."

The headline was to have officially read, "SARS Responsible For 100 Deaths," which of course brings an entirely new meaning to the story. SARS, an acronym for Severe Acute Respiratory Syndrome, has killed 100 people worldwide and infected more than 2,600 to date. Experts have linked SARS to a new form of coronavirus, other types of which usually are found in animals. SARS is believed to have jumped from animals to humans, and now from human to human.

Johnston, apparently very sorry for her quick organization of a wrong boycott, issued an edict to all of her followers that they each buy a diehard battery from Sears to attone for the misunderstanding.

Baghdad, Iraq (AP) - Sometime during the night, Iraqi officials reported to the Associated Press and Iraqi state television that explosions were heard in the vicinity of Baghdad, the capitol city of Iraq.

New York, NY (AP) - With the war still raging in Iraq, the Committee for Cool War Names (CCWN) has nominated and picked their winners for the Coolest name of the 2nd US/Iraqi War.