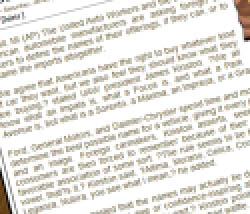 Greensboro, NC (AP) - A recent posting of an article to a humor-oriented website proved to be more harmful than funny in the eyes of one of its targets and had to be deleted, according to the article's author.

"It was more harmful than funny in the eyes of one of its targets," stated the author. "I certainly meant no harm whatsoever, though I knew the potential was there, " he added. For that reason, the author stated, he chose to use first names only, avoid any identifying details, and carry an overwhelming air of ambiguity throughout the piece.

Still, however, feelings were hurt.

"It was never my intention to hurt this person or these people," he stated. "This person or these people are not famous and would not want to be for the actions that the article merely alluded to," he added. "It was an invasion of privacy, of sorts, though it remained an honest and truthful reporting of only the simplest angles on a real-life story that happens everywhere everyday."

Ironically, the author said, only the people who already knew of the story could have enjoyed the posted article for that reason. To the outsider looking in, it would likely have served as a reminder of an identical or similar experience.

Ultimately, however, the article was deleted following the protest of one. The author learned his lesson, too. "I will never localize a real event to the point that people?s identities are revealed by using first names only," he said. "It was poor judgment and relied upon someone else's ability to enjoy self-effacing humor. Not everyone is willing to hurl themselves upon the tracks," he concluded, "And I will never again be the one to push them."

St.Louis, MO (Associated Press) Following on the heels of their wildly successful introduction of Michelob Ultra this past summer, brewery giant Anheuser-Busch is set to unveil new Budweiser MEGA.

San Diego, CA (Associated Press) The Tampa Bay Buccaneers put an end to their long history of losing by taking a 1-0 lead against the Oakland Raiders in the best of three Super Bowl Series on Sunday. The Bucs defense scored as many points as the Raiders, 21, en route to a 48-21 whipping of the AFC champion Raiders.