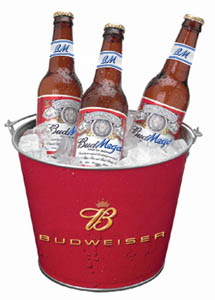 The newest king on the block, BudMEGA.

St.Louis, MO (Associated Press) Following on the heels of their wildly successful introduction of Michelob Ultra this past summer, brewery giant Anheuser-Busch is set to unveil new Budweiser MEGA.

Michelob Ultra, with its low-cal low-carb combination, has quickly gained 3.2% of the domestic beer market share, so hopes are even higher for the new BudMEGA. "Consumers have told us they want more with less, and we have delivered it by the case," stated Adolphus Busch IV, "Now we are going to deliver more with more, and we will deliver it by the truckload."

What will make BudMEGA different from any other beer is its departure from simplicity. Gone are the basic, hops, barleys, and malts from which most beers are made, and lost is the focus that has long sought to minimize calories and carbohydrates.

Instead, the beer will be loaded with fat, cholesterols, carbohydrates, sodium, sugars, artificial flavorings and colorings and, of course, calories. Early testing of the concoction showed a tendency for the mixture to congeal at typical beer-serving temperatures, however, so even more chemicals were added to eliminate the problem, Busch said.

"BudMEGA was beginning to taste less and less like a beer as it evolved and more and more like a meal," Busch said. "Artificial colorings and flavorings brought it back to what we know Budweiser to be, but we've still managed to capture a flavor that is very full-bodied or full-figured, and very meaty," he added.

The beer will also feature a skyrocketing alcohol content to accompany its full taste. Forty six of the fifty states will allow its sale with a twelve percent alcohol content.

Busch said that a twelve ounce serving of BudMEGA will include 460 carbohydrates, twenty eight grams of fat, and 840 milligrams of sodium. "For years people have joked about 'drinking' their dinner at a local bar. BudMEGA makes that not only possible, but logical, too," Busch said.

Greensboro, NC (AP) - A recent posting of an article to a humor-oriented website proved to be more harmful than funny in the eyes of one of its targets and had to be deleted, according to the article's author.