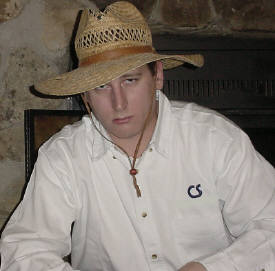 Cleveland, OH (AP) Local boy Wayne McLemore made good yesterday, much to the delight of friends and family who have been supporting him and his efforts for years.

Late last month, McLemore, 24, had been making fair with regularity, just up from his making poor sporadically for much of last year. Still, his supporters were always watching, always waiting, always hopeful.

"We knew sooner or later this would happen," stated Chet Moncrief, his former high school guidance counselor. "Some people just wear that potential like a new shirt that hasn't even been washed yet, and that's always been Wayne," he added.

McLemore's former girlfriend, Sarah Holcomb, had been watching from a distance, too. "When I saw that he had made good, I was not that surprised but I was definitely very happy for him," she said. She added that she is now considering getting back together with McLemore, and will shop for a new outfit before contacting him.

"It's been a long time coming, really, but I was never going to give up," McLemore stated outside his parents' home. "It took a lot of hard work and I'm determined to enjoy this good for a while."

Those close to McLemore, however, tend to disagree. "He won't settle for good for very long," said his father, Edward. "Good, better, best? He's definitely a climber."

Washington, DC (AP) - In a surprising unanimous decision today, the US Supreme Court declared that all bottles have the same rights and non-returnables can now be returned just like their more sought-after cousins.

Detroit, MI (AP) The United Auto Workers and the three largest American automobile manufacturers are asking foreign car makers to define the names of their offerings, if they can, or to rename the imports altogether.