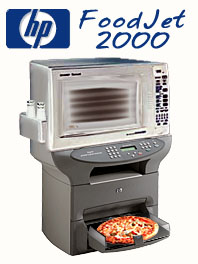 Above: The FoodJet 2000 in Pewter Silver Finish.

The innovative FoodJet 2000 is expected to do as much for the computer hutch as it does for the kitchen by giving users the opportunity to print out favorite foods from any of the thousands of recipes included in the accompanying software package. "We've definitely stepped up to the plate on this one," stated HP CEO James Van Der Brogan.

By using four food group "toners" in place of conventional ink toner cartridges, the FoodJet 2000 will produce meals in seconds. The toners will be capable of producing hundreds of dishes ranging from pot roasts to salmon filets, from Belgian waffles to pizzas. "The only limitation is the imagination and appetite of the user," said Van Der Brogan. "Creme Brulee for dessert? Not a problem," he added.

Hewlett-Packard had been rumored to be working on a computer-based meal-producing machine for years for the home or office setting, though industry analysts generally agreed it could not be done successfully or at a price that consumers would be willing to pay. "Wrong on both counts," Van Der Brogan pointed out as he hoisted up a deep dish slice of pizza loaded with pepperoni and vegetables that printed out in less than thirty seconds at a cost of about two cents. An entire pizza, then, could be produced in about three minutes and for less than fifteen cents.

Seconds later, a piping hot bowl of Brunswick stew was waiting in the printer's output tray with salt and pepper available on the side-mounted holster, though salt and pepper could be selected from the on-screen menu as well. The unit can also produce ice cream treats in room temperatures up to eighty-five degrees. "We wanted a product that people could use for any item they might fancy, anything that can be produced using the four food groups," Van Der Brogan said.

Rockwood, ME (AP) - Lonny Vogles legally changed his birthday today in the Rockwood courthouse after complaining to relatives and friends of being "gypped" seventeen years in a row on his Dec 28 birthdate.