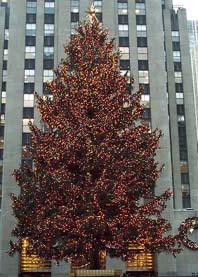 As the old saying goes, "Christmas just seems to get earlier and earlier every year," this year it is actually true. Jacqueline Burnam, head researcher at the SFRF (San Francisco Research Facility) announced to a fully-attended press room today that indeed, "The holidays will be exactly 23 hours and 12 minutes early this year."

"Several factors have led to this conclusion, " she added. "The greenhouse effect, nuclear tests in third world countries, tanker spills in the Pacific, the alignment of El Nino, and other smaller factors have all contributed to the slight speed up of the world's axis turning."

Jim Warner, psychic preist and new age practitioner expounded, "This could have only been discovered with so many agencies and people working together. At first, I thought we were dead on for a 24-hour displacement but thank god Lisa Marie divorced Michael Jackson."

"We are unsure if this will affect next year's rotation, " quipped Sally Starnham, an astronomer at UCLA, "and we haven't even begun to look into years past. This could get ugly. It will affect Daylight Savings Time and all the countries around the world, it could be devastating."