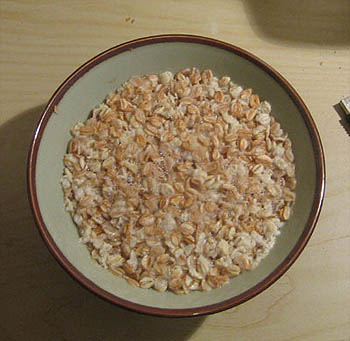 Pittsburgh, PA (United Press International) Researchers have discovered the latest in hi-tech, ultra-dependable adhesives and it can likely be found in your kitchen right now, though you might never have thought about it before.

Oatmeal, an American breakfast staple for over one hundred years, has recently tested out at the University of Pittsburgh as one of the strongest glue-like substances known to mankind. "It's amazing stuff, really," said Dr. Craig Shergold, professor of quantum physics at the university. "We damaged materials and equipment all along the way," he added.

Researchers spent nearly nine months testing various consistencies and flavors of instant oatmeals in order to determine the best combination for strength of adherence (SOA). Shergold said that some bonds were "simply unbreakable" and typically led to the failure of test materials and testing equipment when the bonds were pushed after a 48-hour curing period.

The most remarkable combination was a maple and brown sugar mix prepared to manufacturers' specifications, Shergold said. "One-third cup of water to one packet of instant was strong enough to exceed the tensile strengths of all of our most sophisticated metals," he said. "We were as stupefied as we were impressed."

Mixtures containing fruit, such as strawberries and cream or apples and cinnamon, were weakest among the gluey mixes. The researchers pointed to the relative weakness of fruits in general as the problem and, consequently, would not recommend them for use where a strong and dependable adhesive is desired.

The testing continues and has now moved beyond the laboratory. Over twenty students and faculty on campus are using oatmeal to hold things together in the real world. Car bumpers, storm windows, and a 600-pound electronic message board in the student center are just some of the items being held in place by a hot breakfast cereal.

Shergold feels oatmeal would be a natural for the construction industry. "Nails and rivets do fail, of course, but oatmeal is the great constant, the pure and natural adhesive," he said.