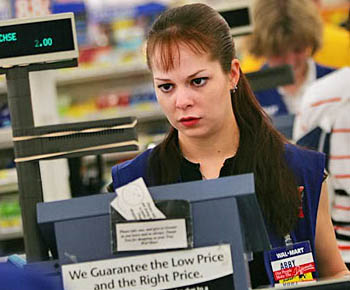 Kernersville, NC (Associated Press) - Customers at the Kernersville Wal-Mart reacted negatively yesterday to 22 year-old cashier Mindy Warburton's attempts to avoid customers at her otherwise unused checkout lane. The register, number fourteen of twenty eight in the store, is positioned in the center and sees less activity than registers at the ends which are closer to the exits.

"Mindy has been here long enough to know better, but not long enough for us to put her in a higher volume checkout line," stated Jim Goosman, assistant cashier manager, second shift. "Bottom line, she needs to invite people over when she has no customers waiting."

Warburton was reportedly standing at the cash register too long after customers left, pretending to tidy up candy and gum displays, and using her diminutive size (4'10") to hide behind the taller candy racks, making her visible only to customers who passed by in search of shorter lines. "They are told to step out from all of that and actively look for customers who may be ready to check out," Goosman indicated.

The cashier denied the reports, stating that the candy racks were a mess due to "some rugrats who picked up everything and wouldn't put any of it back." Warburton claimed that, other than the candy and gum disaster, the shift ran smoothly and without incident as she did what she had been trained to do.

Warburton has been at Wal-Mart since June of this year. Goosman plans on a mid-afternoon conference with Warburton and General Manager Pete Babcock to discuss the reports as well as to lay out expectations for the holiday season. It is unclear as to whether the management team will review or use security camera tapes during the conference.