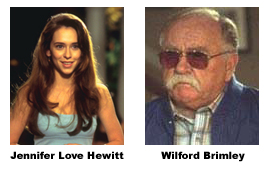 Hewitt and Brimley to Wed

The announcement came as quite a surprise even to those who make it their business to keep track of such matters. "I would have never guessed that he (Brimley) would be looking to tie the knot, and certainly not to someone so much younger than he is," stated J. Rodney Fedders, long time gossip columnist for such publications as The Enquirer, Star, People Magazine, and The Los Angeles Times.

Love-Hewitt fans, too, are equally surprised at her announcement to marry a much older man. "She did lose her father very tragically, however, when she was eight, so she has always looked to an older man for guidance and companionship on some levels," said Tish Owens, publicist for the young starlet.

Brimley, 74, will marry his close friend and neighbor of many years, Barbara Padgett, 56, whom he apparently met many years ago after his purchase of a riding lawnmower. "He was so excited about it that he began to cut all of the neighbors' lawns that day, too," said Fedders. "The rest, as we say, is history."

Love-Hewitt, 22, plans to marry Sean Wilcott, 39, a technical advisor on the show "Party of Five" in which she starred for three years. "They have been a steady item since the show's last season," said Owens, who also added that a June '03 wedding is being planned for Maui.