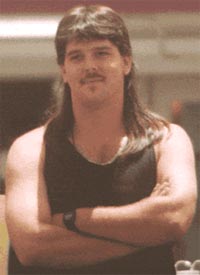 Des Moines, IA (Associated Press) A New Bristol man claims that all snack crackers are "about the same," and has sworn off any previous allegiances he may have had to any particular cracker.

Edwin Kowalski, 41, has lived in the Des Moines suburb for the last twenty years and, as he puts it, has "tried them (snack crackers) all." "There was a time when I would try anything new as soon as it came out," he added. "That time, however, is no more."

Kowalski's growing disdain began in the mid-90's, he estimates, when he realized that "Now With More Cheddar Taste" was just another way of saying that it could have been done better all along. Also, Kowalski said, he grew tired of so-called "New" snack crackers that were exactly like old ones he'd already known."Hi-Ho's, Club Crackers, Chicken-in-a-Biskit, Ritz, Cheez Tid-Bits, Bugles, Doritos, what's the difference?" asked Kowalski.

"He started getting madder and madder when I would come home with groceries," said his wife of sixteen years, Evelyn. "I could tell when he wanted something new and different, and it was getting harder and harder to find it," she added.

Kowalski was once an avid Triscuit fan, he admits, and would put just about anything on one. "I remember once when I had a tray of meats and cheeses that Evelyn picked up from the deli counter at the A&P, had it right there with me on the Barcalounger, when Sandi Duncan came on the television with a commercial for Triscuits," gleamed Kowalski. "I could have married her right there," he joked as Evelyn threw a dish towel at him.

But the affair with Triscuits ended when the fifteen ounce box was downsized to thirteen ounces. "I noticed that the box didn't say, 'Now with eight percent less," lamented Kowalski, and that was his last box.

For now, Kowalski will continue to eat snack crackers but promises not to enjoy it too much. "I've been considering trail mixes and the like," he said, "And I may pursue that further in the very near future." "That's just fine with me," Evelyn added, "I just want to see him happy again."