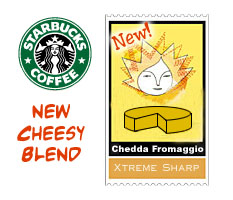 Coffee of the Future

Seattle, WA (Associated Press) Seattle-based retail coffee giant Starbucks announced Friday that it will begin to market a cheese line of coffee drinks throughout all of its franchises beginning December 1st. "It's the next greatest thing in coffee," stated Gerald Lawson, founder and CEO of the most successful beverage store in the world.

Along with adjectives like, "hot," "fresh," and "good," then, will come "gooey" and "cheesy" when it comes to describing coffee. "We have never been afraid to do anything we wanted with coffee at Starbucks and that pioneering tradition and spirit will continue," Lawson added triumphantly to the cheers of attendees at the press conference.

Those close to the operations of the company believe that the word "fromage" will adorn the menu boards as customers choose from the likes of various cheddars, mozzarella, bleu cheeses, swiss, and even goat cheese to take their beloved coffee to new heights. "There is definitely a buzz and an expectation that this will be a new trend and, eventually, a marketing direction that the industry will follow," stated Karen Wilkop, editor of the bi-weekly trade publication Coffee Klatch. "Swiss mocha might share shelf space with Swiss cheese mocha, for example, in our grocery stores in the very near future," she added.