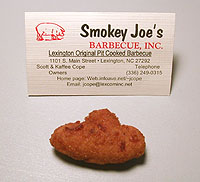 The Holy Grail of Hushpuppies

Scott and Kaffee Cope, owners of Smokey Joe's Barbecue, set out yesterday morning on what seemed like a normal Wednesday. After getting the kids to school, they headed into their restaurant to get it ready for the normal lunch rush.

Billy Greeson was the first customer in that morning, "When Kaffe brought me out my plate of bbq, slaw, fries and hushpuppies .. I just stared. I said 'That one looks like a small submarine'."

Kaffee called Scott over and they all just stared at the plate. "Oh my god", said Kaffee, "That does look like a small submarine doesn't it Scott?" All Scott could do was nod his head.

More customers came in throughout the lunch shift and they too were mesmerized by the small chunk of cornmeal. Before they knew it, Scott and Kaffee had pulled in 400 visitors that afternoon, each stopping to gawk at the hushpuppy. When reverend Joseph P. Parkland strolled in after receiving a strange phone call, he declared it a holy sign.

"It was like a message from God reminding us of Noah and that if we didn't straighten our evil ways, we'd be subjected to another Great Deluge. That means flood," he added to make himself completely clear.

The Cope's have plans to get the hushpuppy clearcoated by her brother Clive before it gets eaten. "We've got to preserve this religious sign so that others may feel its power in the future," Kaffee stressed.