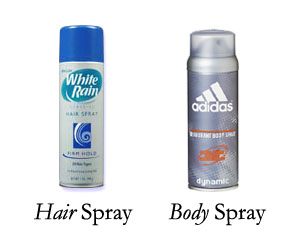 Last night around 9 pm, Larry Gelsing of White River, South Dakota, wasn't feeling too fresh. Like he always does when this happens, he walked to the bathroom to spray on his Adidas brand body spray. Only this time was different.

After having a 12-pack since getting off work at the Handi Mart, Gelsing's judgement was slightly impaired. Instead of grabbing his trusty body spray to liven up his night, he mistakenly snatched his wife's White Rain Firm Hold hair spray. Not a good move.

At 7 am the next morning, he awoke on his couch to the family dog "Lucky" licking his face; apparently passing out after returning to the couch later that night. When Gelsing realized what had happened and that he couldn't move (thanks to the immense body hair he inherited), he almost panicked.

Thinking quickly, he called out to his wife Paula, who ran in the room flabberghasted at what she saw, "I just didn't know what to do, he looked so helpless." 911 was called and the White River Fire Department came to the rescue eventually using a makeshift cocktail of readily available home products to get him free: peanut butter, vinegar and KY jelly.

"If Paula only used the Regular Hold White Rain, we might not have needed to be called," stated Troy Harmon, fire department chief.

"Yeah, I don't know what would have happened if we hadn't covered our couch with that plastic ... I might still be stuck to it," remarked Larry. When asked what the first thing that went through his mind was, he replied, "Well, I just remember all that dog spit in my face and not being able to get away from it. I thought I was on one helluva drug trip!"