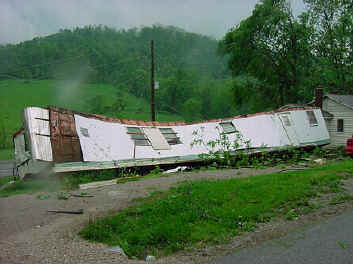 Atlanta, GA (Associated Press) Severe storms as the seasons change have sparked countless tornadoes over the years that have killed at least 35 people throughout the southeastern United States. Property damage since the time records have been kept would push figures into the tens of thousands of dollars at the very least, according to experts.

"When one thinks of the southeast, one thinks of trailer homes and trailer home parks," stated Mark Whickham, regional claims director for Allstate Insurance Company. "It's like living in a tin can, and a big wind can be unforgiving as it sweeps it away," he added.

The National Oceanic and Atmospheric Association (NOAA) estimates that tornadoes regularly pack winds of over fifty miles per hour. "That's enough to jeopardize the housing of choice in this area," Whickman said.

Whickington pointed out that along with substandard housing typically comes dozens of vehicles in various stages of non-usage, garage-sale type debris, and assorted livestock on the premises. "If you've ever been hit by a goat at a high speed, you'd be lucky to live to tell about it," Whicklinger said.

Whickston estimates that more lives and property will be lost to such storms in the future as well. "Until scientists come up with a way to predict the formation and path of a tornado days in advance, these people will have no chance of hitching up and moving out of the way," he said.