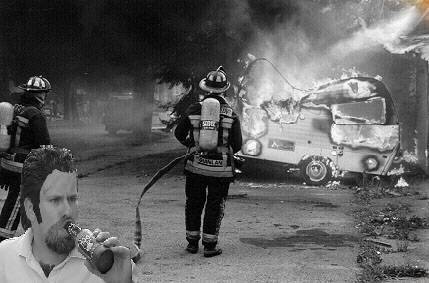 Knoxville, TN (Associated Press) Knoxville City officials are searching for clues in the wreckage of the fifth trailer arson case in the last eleven days, a case which has baffled both Fire and Police departments from the outset.

Wallingford County officials are also interested in the case that has jolted the city into a state of fear and confusion as they, too, have several unsolved crimes of a similar nature from earlier this year. "We'd certainly like to talk to someone about all of these fires," stated Milton Sleszak, Wallingford County Fire Commissioner.

There have been no deaths or reported injuries in any of the blazes, however, which is one reason police are certain it's arson. "Whomever it is that sets these fires doesn't want to see anyone get hurt," Sleszak said Tuesday. "They seem to want to destroy this particular type of property, and that's it," he added.

Officials fully expect another trailer fire within the next 24-36 hours, and also believe that the perpetrator may stay near the area to watch the fire and rescue efforts. "We will definitely keep our eyes peeled if we should have another scene like these others," Sleszak stated.

Doherty concurred that it is likely that the suspect or suspects may stick around until things cool down. "Most arsonists feel a need to complete the picture, to see everything that happens as a result of their crime," he said. "This gives us a better chance of apprehending someone near any subsequent crime scenes of this nature."

Anyone with information about these fires should contact the Knoxville Police Department at 337-5400.