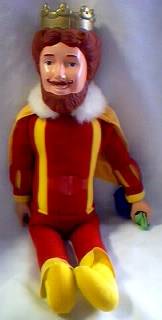 Miami, FL (AP) - Morris Van de Buren, the self-proclaimed Burger King "King" in the Burger King commercials, was arrested for stalking today in Miami, Florida. Although he hasn't officially worked for Burger King since the mid 80s, Van de Buren has appeared off and on at Burger Kings across the world in his king costume.

During the late 80s, Van de Buren became depressed because Burger King officials had begun to use animation, cartoon characters, and other "bit characters" in their commercials. He felt that he was the undisputed "King" and that none of his replacements were worthy to wear the crown. Unbeknown to the BK Corporation, he then stole his King costume so that no one could truly replace him.

The unofficial word was that Van de Buren was silently released from his role as the King because of his alleged homosexual lifestyle. One Burger King executive, who wished to remain anonymous, said that "Morris was a gay blade who made us uncomfortable. I mean, who ever heard of a gay king?"

Through much of the early 90s, Van de Buren continued to receive royalty checks because company officials had never really fired him, supposedly for fear of a lawsuit being slapped on the corporation regarding Van de Buren's sexual orientation. When that money began to peter out, Van de Buren sold obsolete and rare Burger King paraphernalia on ebay to sustain himself. After making a small fortune, he eventually became a groupie with the Backstreet Boys. The Backstreet Boys later signed an advertising deal with Burger King complete with action figures in their kids' meals. It is not known if there is any connection.

When his late-night calls and generally unwanted advances became too much for the Boys, they called in help. Miami police chief Juan Gonzalez and his S.W.A.T team stormed Van de Buren's hotel room late last night as one of the Backstreet Boys kept him talking on the phone. One officer described, "It was a sight I'd never want to see again. To think that this man was the inspiration for so many children. His room was cluttered with cut-out pictures of all the Backstreet Boys and there were sexual toys lying around the place. I was disgusted."

In a public statement after his release on bail, Van de Buren announced he would finally be selling his last prized possession on ebay; his King costume. It is unsure what price it would fetch, but industry experts say it would surely be seven figures after this major media story.