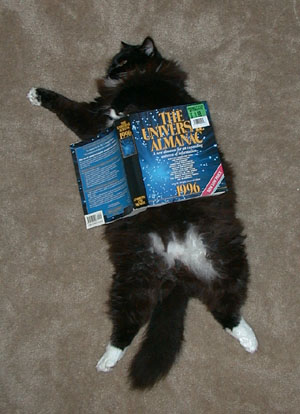 Tipton, IN (AP) - A local cat in Tipton, Indiana, was found passed out and sprawled on the floor today by his owner, Jeff Rader. The only evidence that can shed light as to why the feline was found unconcious is a copy of The Universal Almanac dated 1996, found draped over the animal.

The almanac was lifted to find that the last page read was p.304, which contained the fertility rates of american women dating from 1930-1994. Chief Investigator Hal Bloomfield of the Tipton police deduced that the cat must have been reading the almanac at the time of the occurence.

When asked whether he knew if the cat could read, Rader fidgeted around momentarily until finally bursting out into a tirade about animal rights. Rader is the president of the Tipton chapter of PETA (People for the Ethical Treatment of Animals).

After being sedated, Rader then expressed concern for finding out exactly why his cat "Pauley" would have passed out while reading about fertility rates.

"I want an answer to this right now so that this doesn't happen to other animals around the globe," said Rader, "I won't hesitate to sue the almanac publisher if that's what it takes to get to the bottom of this."