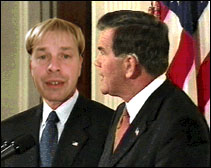 Washington, DC (AP) - Homeland Security Director Tom Ridge officially appointed a new head of staff today to help him "steer the country in the right direction." Cletus Gibson, 31, accepted his new post with much enthusiasm. "I will see the day when my little youngins can walk in the street and not have to worry bout them commies," he stated.

Having said that, Gibson went into a 30-minute rant on how he "can just look into someone's eyes and tell if you're a commie." After security pulled him aside to calm him down, Ridge touted Gibson's willingness to do what it takes to get the job done. "He has told me that he will leave no stone unturned," said Ridge referring to Gibson.

A short time later, Gibson returned to the podium to map out his "7 points of light".

Sounding more like a vigilante speech, Gibson ended by saying that he "would clean up America and bring it back to the glory days of the cold war. We need to be on the lookout each and ev'ry day for commies and whatnot. We cain't let our guard down enny more."