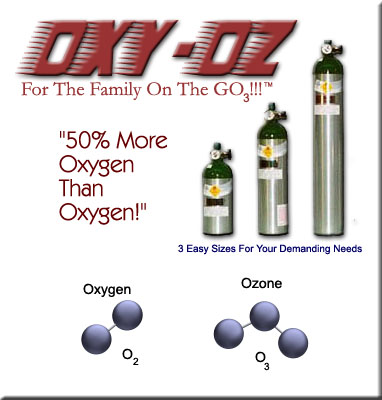 For A Cleaner Tomorrow

Milford, NH (AP) - OThree Inc. announced today that sales of their portable Ozone systems has tripled in the last three months and that they may consider going public this year. They credit their new ad campaign and agenda with achieving much of the success and admitted that the "Suck It Up" campaign of the previous year should never have been used.

Dom Bennington, Chairman and CEO of OThree Inc., credits their new slogan "50% more Oxygen than Oxygen" with the dramatic upturn in sales. "We've known all along we have a superior product to regular portable oxygen carriers," says Bennington, "we just had to find a way to educate the public."

"We know that if we take our company public," continued Bennington, "we'll gather enough capital funding to corner the portable ozone market. Investors can't help but to see what our growing customer base sees--quality and quantity. We not only deliver 50% more oxygen than oxygen, we do it 50% more efficiently."