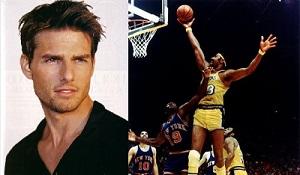 Academy Award winning director John G. Avildsen (Rocky, The Karate Kid, The Karate Kid, Part II, and The Karate Kid, Part III,) will lead Cruise and others in telling the story of the greatest basketball player who ever lived. Wilt “The Stilt” Chamberlain was 7’1” and grew from 250 pounds to 300 pounds by the end of his pro career with the Lakers. He is the only player to have scored one hundred points in a game and average over fifty points a game for an entire season.

Cruise, who is no stranger to playing tall and large leading men, sees the role as his biggest challenge. “One can’t wear a fat suit in a basketball uniform,” Cruise stated, as he discussed the difficulty in gaining weight in just a few months that Chamberlain gained over his fourteen-year career.

Werner Herzog will portray Chamberlain’s college coach at Kansas University, the legendary Phog Allen, and Beyonce will make a cameo appearance as one of Chamberlain’s reported 20,000-plus sexual trysts. Avildsen is excited to be filming in Philadelphia again, Chamberlain’s hometown, but will not revisit the steps of the Philadelphia Museum of Art which the star regularly traversed during training runs as a high school player. “I’m afraid it would not be accepted very well,” Avildsen said, as he plans to make this his final film.