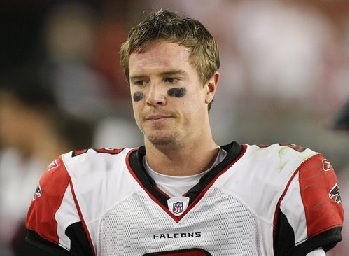 Cold As Ice In Postseason

Known to fans as “Matty Ice” because of his cool demeanor under pressure and regular season success, the five-year veteran threw an interception and mishandled a snap in the shotgun to halt two different drives.

“It just wasn’t my day,” Ryan stated, although he did throw for a team playoff record 396 yards and two touchdowns, most of that in the first half. For Atlanta sports’ fans, it wasn’t their day, either.

The top-seeded Falcons (14-4) tried to pull out another season-saving drive at the end, but Matt Ryan's fourth-down pass for Roddy White with 1:13 remaining was knocked down by San Francisco linebacker NaVorro Bowman.

“We’re lucky that he (Ryan) plays for them, because we couldn’t afford turnovers in a game like this,” said 49ers’ Coach Jim Harbaugh. Rookie Colin Kaepernick threw for 233 yards and a touchdown with zero turnovers for San Francisco.

The 49ers (13-4-1) will meet the winner of the AFC title game between New England and Baltimore. San Francisco will be trying to join Pittsburgh as the only teams with six Super Bowl championships.

The victory was sweet redemption for the 49ers, who lost an overtime thriller to the New York Giants a year ago in the NFC title game.

Saxapahaw, NC (Associated Press) A report of a cheese being stored improperly surfaced earlier this evening in a sleepy central North Carolina town, according to a local resident.