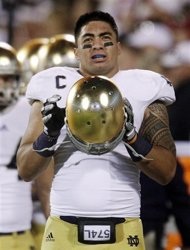 Te'o Be Or Not Te'o Be? That Is The Question

Manti Te'o, who led the Fighting Irish to the BCS championship game this year and finished second for the Heisman Trophy, said in a statement today that he fell in love with a girl online last year who turned out not to be real. Now he will meet next week with Oprah to air it out, just as Lance Armstrong did earlier this week when he admitted to taking performance-enhancing drugs.

He said during the season that his girlfriend, Lennay Kekua, died of leukemia in September on the same day Te'o's grandmother died, triggering an outpouring of support for Te'o at Notre Dame and in the media.

"While my grandma passed away and you take, you know, the love of my life [Kekua]. The last thing she said to me was, 'I love you,'" Te'o said at the time, noting that he had talked to Kekua on the phone and by text message until her death.

Now, responding to a story first reported by the sports website Deadspin, Te'o has acknowledged that Kekua never existed. The website reported today that there were no records of a woman named Lennay Kekua anywhere. Similarly, Armstrong maintained his innocence even in the wake of a voluminous U.S. Anti-Doping Agency report that portrayed him as a ruthless competitor, willing to go to any lengths to win. So far, Te'o has denied that he was in on the hoax. Because the Heisman Trophy is a popularity contest in many respects, however, Te’o’s story served him well in its pursuit.

"This is incredibly embarrassing to talk about, but over an extended period of time, I developed an emotional relationship with a woman I met online," Te'o said in a statement released this afternoon. "We maintained what I thought to be an authentic relationship by communicating frequently online and on the phone, and I grew to care deeply about her."

Deadspin reported that the image attached to Kekua's social media profiles, through which the pair interacted, was of another woman who has said she did not even know Te'o or know that her picture was being used, according to Deadspin. The website reported that it traced the profiles to a California man who is an acquaintance of Te'o and of the woman whose photo was stolen. Also, Te’o’s spelling of the name Lennay would be, in the opinion of many, a misspelling by someone who was not very detail oriented in the fabrication of a story.

Winfrey has stated that she “expects Manti to be as honest and forthcoming as Lance,” according to a spokesman.

BELLEFONTE, Pa. – Jerry Sandusky will spend the rest of his life behind bars. NFL commissioner Roger Goodell, however, will review the sentence handed down by Judge John Cleland as requested by the New Orleans Saints organization.