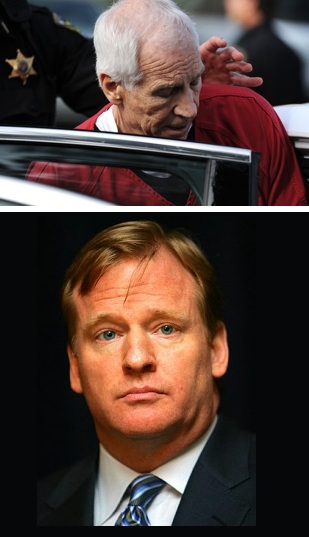 BELLEFONTE, Pa. – Jerry Sandusky will spend the rest of his life behind bars. NFL commissioner Roger Goodell, however, will review the sentence handed down by Judge John Cleland as requested by the New Orleans Saints organization.

The 68-year-old former Penn State defensive coordinator was sentenced to 30 to 60 years in prison on Tuesday. The sentence was delivered in a packed courtroom of the Centre County Courthouse. Sandusky was found guilty in June of 45 counts of sexually molesting 10 boys over a 15-year period.

Saints players, coaches, and even their general manager feel they have been wrongly accused and unfairly sentenced to a harsh combination of fines and suspensions for their supposed roles in Bountygate and, as the fraternity of football dictates, would like for Goodell to review and perhaps reduce the heavy sentence handed to Sandusky.

"You will serve not less than 30 and no more than 60 years in prison," Judge Cleland told Sandusky. "That has the unmitigated impact of saying 'the rest of your life in prison.' "

"That’s a long time for an old man," Saints linebacker Jonathan Vilma said, “and it just seems excessive and unjust just like my full season suspension was,” he added.

Deputy attorney general Joseph McGettigan took no issue with the sentence. "The defendant will remain incarcerated for the rest of his life," McGettigan said.

It is unclear at this point if Goodell will have any influence on the judicial process, but he has stated that he “would be willing to take the matter under advisement,” according to a spokesperson for the NFL.

The National Aeronautics and Space Administration (NASA) has announced a new program that will keep the familiar shuttles flying for at least a few more years.