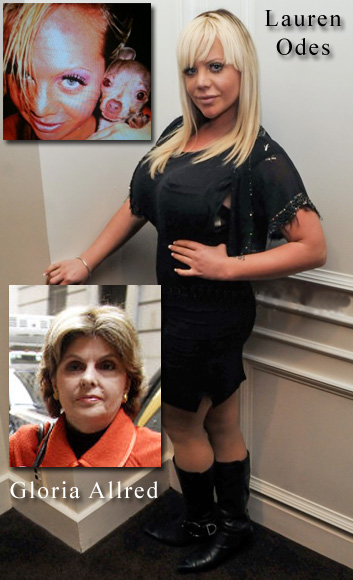 New York (AP) - Lauren Odes, the woman who was fired from Native Intimates, the New Jersey lingerie warehouse, claims she was fired for being "too hot."

Ms. Odes claimed her Orthodox Jewish employers told her to tape her boobs down, that she was too alluring for the warehouse personnel.

Cletus Gibson, co-owner at chuckandcletus.com responded publicly to the suit. "Alluring? Ms. Odes appears to be hot at first but that's just her ginormous boobs distorting the picture. When you focus on her face, she's really quite indistinguishable from her attorney, Ms. Allred, who actually resembles a beat-up Depression Era farm horse. Not knowing Ms. Allred personally, when I first caught this story I wasn't too sure who was supposed to be the plaintiff and who was the attorney."

Gibson laughed. "Take away Ms. Odes' fake tan, bleached hair, add-on nails, and caked-on make-up ... she kind of looks like her little dog. I mean, look at that humongous forehead. I could grow crops on that."

Ms. Odes was asked at one point to wear a red bathrobe by her employers, to cover up her offending breasts.

Orthodox Jews have long been offended by women's breasts, unlike the Unorthodox Jews, who seem to favor them. "I like boobs," stated Michael Weinstein. "I guess that makes me unorthodox."

When Attorney Allred was first approached about the case, she was aghast. "I couldn't believe they fired her for looking too hot," she stated. "I took one look at her and knew they'd fired her for insubordination or poor job performance. Definitely not because she was too hot. They'll have a lot to answer for in court."

Both Playboy and Penthouse, along with Jersey magazine start-up Whores You Know (a wholly owned subsidiary of Bitches You Know), have all approached Ms. Odes regarding a future photo spread. Odes declined to answer at the time but winked at the 17-year-old representing the Jersey start-up.

"Personally, she reminds of that show, Jersey Housewives. You ask me, she'd fit right in there. Don't get me wrong," Gibson concluded. "I'd do her. I'd do her in a second. Even if I had to take a shower afterwards."

LONDON (Reuters) - Bee Gees singer Robin Gibb has woken from a coma more than a week after he lost consciousness and has attempted to communicate with family members, the BBC reported on Saturday.

The National Aeronautics and Space Administration (NASA) has announced a new program that will keep the familiar shuttles flying for at least a few more years.