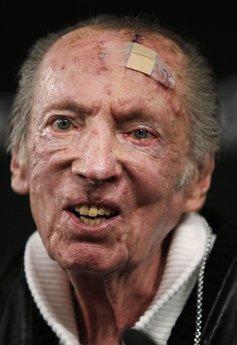 There MUST Be Better Days Ahead

Team owner and president Al Davis, who is no stranger to peculiarities, misfirings, faux pas and blunders, announced Sunday that the club will "sit out the entirety of the latest collective bargaining agreement" which is expected to be voted upon by player representatives prior to union recertification this week.

NFL Commissioner Roger Goodell has indicated that he accepts the temporary, but lengthy, hiatus from one of the more storied franchises in the league in exchange for what he calls "a welcome respite from calculated lunacy from a very, very old man with a greater penchant for game playing rather than playing the game itself."

"It is with immediate resolve and zero regret that I accept the Oakland Raiders' absence from the NFL landscape for the stated time period," Goodell said early Sunday. "We wish the players, coaches, staff members and fans well as they collectively regroup and hope for better days ahead."

During the interim period, the Raiders' name, team colors, copyrights and associated properties will remain intact as if the team was still "competing," but the players will continue to not play for the Raiders on a weekly basis while all scheduled games will be forfeited under the never-used "no contest" rule, which was originally set up during World War II in the event a team could not suit up a minimum number of players for a game.

The team will continue to draft, practice and trade poorly, however, with Sundays passing by instead like autumn afternoons for bridge clubs and resting grandmothers.

Years of irrelevance make the announcement understandable, experts agree, and ESPN's Adam Schefter pointed out "that there is a sense of relief from the fans who seem ready to embrace the lack of disappointment and the saving of money on face-painting and costumes."

Foxboro, MA (Associated Press) The NFL whirlwind offseason continues with teams signing, releasing, and trading free agents at a frenzied pace as the new season rapidly approaches. The New England Patriots are no exception, and have added Ryan Leaf and Tony Mandarich to the fold.