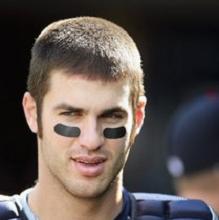 Mauer, who is considered by many to be one of the finest players in the game, stunned everyone on Thursday when he admitted, "I'm a catcher," in an apparent reference to being gay.

A native of the Minneapolis-St.Paul area, Mauer is a four-time All-Star and a one-time MVP and a cherished member of the Twins in the early stages of an eight-year contract extension with the Twins worth $184 million, which will take effect from the 2011 season to the 2018 season. It is the richest contract in the history of major league baseball for a "catcher."

Mauer used to share a house with good friend and Twins teammate Justin Morneau (Minnesota Twinks?) in St. Paul during the 2006 season. Mauer and Morneau no longer live together, as Morneau has married. "Justin moved on," Twins manager Ron Gardenhire stated, "and the experiment was over just like that."

Mauer modeled for Perry Ellis in the 2004–05 off-season and is also featured in television commercials for Head & Shoulders. "That's modeling and head in his spare time, so you can connect the dots," Gardenhire said.

NBA Commissioner David Stern issued a swift disciplinary ruling after the Los Angeles Lakers' five-time NBA champion guard cursed and used a homophobic slur when referee Bennie Adams called a technical foul on him Tuesday night in the third quarter of a victory over the San Antonio Spurs. Americans, too, face a similar penalty issued by Stern.