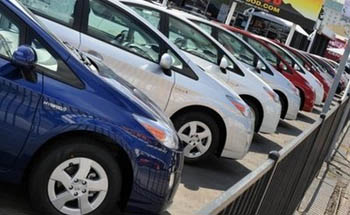 The Toyota Prius, Freddy, pictured on the left with his extended family.

The US Govt released a memo today absolving James Sikes' Prius of any wrongdoing during the March 8 incident where the car's accelerator allegedly became stuck. The car was released upon its own recognizance, pending a formal hearing.

Sikes called 911 while his Toyota Prius was speeding on a California highway at over 90 miles per hour. Frantically, he explained to the operator that his gas pedal was stuck to the floor and he was slamming on the brakes but nothing was happening.

The government memo, leaked earlier today, said that the same circumstances could not be duplicated under controlled circumstances.

"Every time we pushed on the brake, the car cut off and slowed down," said Margie Allory, Director of the government's Panel for Investigating Toyota Accidents (PITA). "I would like to mention, however, that the front brake pads were visibly worn and the tires needed rotating. And also, the Prius should have an oil change in the next few hundred miles and it definitely needs to be washed."

Attorneys for the car had no comment, stating only that PITA was not the final word.

At a press conference later in the day, the Prius issued a short statement from a Holiday Inn in downtown San Diego that it was the victim of "cheap gas" and "owner abuse" and that it didn't want to return to that "hell-hole" ever again.

During the press conference, James Sikes was spotted at Bob's Spectacular Used Cars, scrutinizing a 1991 Ford Escort. Neither he nor the Escort could be reached for further comment.

Beaumont, TX (AP) - Peter McElroy, of Beaumont Texas, has entered his prized cucumber into the Guinness Book of World Records.

Greensboro, NC (AP) - A recent poll has discovered that the website chuckandcletus.com has been found fun for all ages except for those aged 34. Researchers and statistic analysts aren't sure why this new data points this way, but further polling may result in the answer.