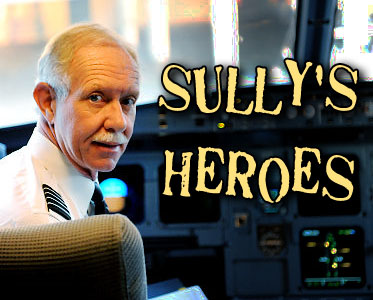 Sully's Heroes will air opposite Survivor

Charlotte, NC (AP) - US Airways Captain Chesley “Sully” Sullenberger, 59, announced his retirement on Wednesday after flying from Fort Lauderdale, Florida, to Charlotte, North Carolina. In the same breath, he also announced that he would star in a new reality TV show on Fox, "Sully's Heroes."

On January 15, 2009, a flock of geese were sucked into the engines of US Airways Flight 1549, which Captain Sullenberger quickly ditched into the Hudson River soon after take-off from LaGuardia airport, saving all 155 people aboard. The reality show will try to capture much of this same drama.

"We want to capture much of the same drama that Sully fostered last year," stated Mary Katzenberg, Fox's head of reality TV. "I mean, when he crashed, we were all sitting around watching TV and thought, that's good TV. When Sully agreed to talk with us late last year, we closed the deal."

The show will have Captain "Sully" doing what he does best, crashing planes. Each week, the pilot will crash-land a different plane while cameras focus on the melee that ensues.

"I'm excited," stated Sullenberger at his press conference. "Each week we get to see what people are made of, and I'm betting it's cheese. Really good, aged Wisconsin cheese."

Producers have hinted that there will be three cockpit cameras and up to thirty other cameras positioned throughout the plane and bathrooms. There may even be an "after-dark" version of the show to capture people initiating themselves into the mile-high club moments before the crashes.

"Each week will have a different theme crash," stated Katzenberg. "One week we may do an electrical failure with tons of turbulence. One week we may do a fuselage fire with smoke everywhere. And we haven't ruled out a 'Terrorist Week' theme yet. It's going to be the best reality TV show in history."

And to top it all off, producers have leaked that Sully will be the only person on board each plane that knows it's going to crash, thus creating an "authentic reaction," as Captain Sully puts it. "I want everyone to see exactly what goes on when a plane goes down. You see these big convict-looking guys get on a plane and nine times out of ten, they're the first to wet their pants."

"It's going to be great TV," he added with a smile.

The show's pilot episode will be a re-creation of Sully's famous Hudson River crash. "It'll be difficult getting the geese to cooperate," stated Katzenberg, "but in the end, it's going to be one hell of a show."

Dearborn, MI (Reuters) - Ford announced today the latest of innovations in personal car luxury, the Car-a-oke. It's a system designed to display the lyrics to your favorite music directly on the front windshield of the car so the driver can sing along while ensuring the utmost in automobile safety.

Kiev, Ukraine (AP) - The second annual Man-Dog Olympics are being held in Kiev, Ukraine, this year; the events test the union between man and man's best friend to the limits.