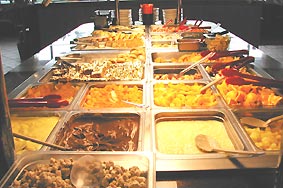 Tripp Schroeder, owner and long-time customer, has always been attracted to the concept. "We sincerely believe that we're doing this business the right way, and every other buffet restaurant out there is doing it completely wrong." Stumpy's doesn't charge you a flat price, they charge you based on your weight when you enter the doors.

"We picked up an old weight scale from this warehouse that went bankrupt, and the concept just seemed to grow from there, " states Denise Schroeder, Tripp's wife and business partner. "The idea just hit us and after we digested it a while, this is what we came up with."

"We've had a few complaints since we've opened and that damned NAAFA (National Association to Advance Fat Acceptance) has brought a suit against us," explains Tripp.

The restaurant's name is derived from the fact that Tripp lost all his toes on his right foot due to gangrene, and his nickname has been Stumpy since. The Schroeders are also planning on opening a chain of buffet restaurants based on the parking garage concept, where you pay by the amount of time spent in the eatery.

Yazoo City, MS (UPI) - The Professional Back Scratching Institute has just opened in Mississippi and promises to teach "healing through scraping" as the latest in bodily pampering.

Prague, Czech Republic (UPI) - Japanese robot ASIMO has become the new japanese diplomat to the Czech Republic, amid much controversy and applause.