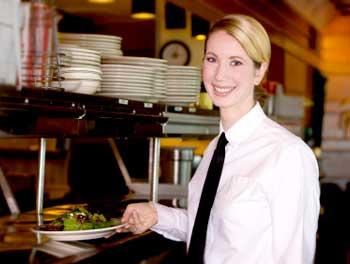 Winnsboro, SC (Reuters) - In an unprecendented move, a local restaurant has hired a crew composed entirely of servers named Sarah.

Jeff Stireman, General Manager of Sal's Ribs and BBQ, explains "Well, it just seemed like sense to me. I got tired of trying to remember everyone's name and this sorta takes care of that." When asked what will happen to those employees not named Sarah, he replied, "They'll be given the chance to move into the kitchen, move into management and we'll just simply phase out the rest of them as they quit. This is a 6-month plan anyway."

Assistant Manager Becky Lehman adds, "It will also cut back on expenses because now we can order nametags in bulk, and we can have our W-2s partially preprinted."

"And there's another thing," says Stireman, "now when I need something done, I just yell 'SARAH' and it gets done. I mean, someone's gonna hear me and do it, right? Well, that's the theory behind it. And that even applies to anyone we hire named 'Sara' or 'Syrah' or anything that sounds like that. Time is money and this new system will save us a lot of time."

Flint, MI (UPI) - On March 24, 2010, the city of Flint, Michigan, began laying off a quarter of its firefighting force as part of an effort to close its estimated $8 million budget deficit. On the same day, firefighters were called to battle at least five fires at abandoned homes in Flint.

San Francisco, CA (AP) - Discovery Channel design guru Christopher Lowell stunned a crowd at his latest book signing in San Francisco by announcing he was gay. He then promptly asked out a guy in the front row to prove his point.