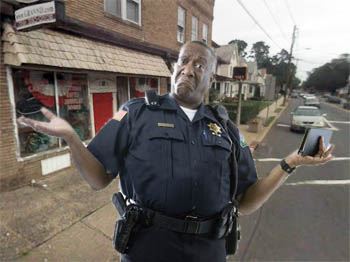 Officer Christopher at a loss.

"I was going the speed limit," Reyas said. "I wasn't on the phone or listening to the radio or even yelling at my kids. I was just driving along and the next thing I knew, we crashed into each other."

Forrester, a gym teacher at a local high school, had much the same story.

"I was just driving down the street, minding my own business, when all of a sudden, we crashed," Forrester offered. "I wasn't talking on the phone or nothing. I wasn't even looking around at the chicks. I don't understand it."

Officer John Christopher, the first official on the scene, corroborates their stories. "I was driving by when it happened. Neither one of them were acting like a fool or anything," he said. "When they crashed, I immediately stopped and assessed the situation. Neither driver had been drinking. Both were wearing their seatbelts. And both also seemed equally unsure just why the accident happened."

Mayor Raymond T. Eppinger issued a statement at a press conference later in the afternoon: "I have set up the Blameless Accident Learning Special Action Committee to investigate the matter fully. BALSAC will report directly to me and won't rest until the hairy details of the accident are revealed for everyone to see. There has to be a reason for this accident and my BALSAC will find out why."

Neither Reyas nor Forrester needed medical attention and neither had any actual car damage. They did not exchange insurance information and as of the time of this report, there has been no actual accident report filed. Officer Christopher said that the mayor's BALSAC reserves the right to file a report in the future should anything new be uncovered.

Katmandu, Nepal (Reuters) - Khagendra Thapa Magar of Katmandu, Nepal, has filed a claim for World's Largest Proportional Dummy (pictured on left). At age 18, he may also be able to file for Youngest Male Adult Ventriloquist, although that record could be short-lived.

El Segundo, CA (Reuters) - Chairman and CEO of Mattel Inc, Bob Eckart, announced today that Mattel will release the long awaited Barbie Crack House. Rumored to be on the drawing board for 8 years, the future collector's item has drawn much interest including its own unofficial fan club.