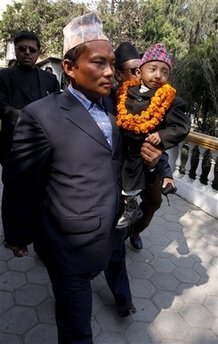 Katmandu, Nepal (Reuters) - Khagendra Thapa Magar of Katmandu, Nepal, has filed a claim for World's Largest Proportional Dummy (pictured on left). At age 18, he may also be able to file for Youngest Male Adult Ventriloquist, although that record could be short-lived.

Khagendra stated to reporters that he liked the attention he got when being toted like a small bag of potatoes and decided to do something about it. So at age 8, he began taking growth inhibitive hormones so that he could "stand out in a crowd," so to speak. His growth stopped at 22 inches.

"I've always wanted to be ventriloquist," stated Khagendra. "I used to have toy yak I carried around. I'd do weather reports with it but somehow, I always thought I could do something bigger with my life. Then one day when I wanted to go to town, my dad had hernia. I thought the idea."

Now, with the life-size dummy modeled after his own father, Khagendra has reached new heights.

Not only can he control full head movement, including mouth, eyes, neck and wiggling ears, Khagendra can also control leg and foot movement of the dummy; although at the present moment, the dummy's right arm can only twitch slightly.

The end effect is that Khagendra can have the dummy carry him around, instead of the other way.

"It is great," Khagendra said. "I did a gig at an old person home in Berlin last week and they didn't know who I was being. When I did to my favorite card trick, the one where I ask them to give card to the little guy so he can tell me what it is through the osmosis, I changed the act. This time, I hop down and went to get the card instead of waiting for them to bring it on the stage."

Khagendra grinned and rolled his eyes. "Three of them poop themselves and one had his glass eye pop out. It was as you say, classic."

Khagendra has scheduled a summer 2010 tour for most of Florida with a late addition of New Orleans and Biloxi..

Phelps, WI (AP) - Bobby Joe and Bradford Lee Johnson of Phelps, Wisconsin, have announced their intention to make the Olympics in 2014 in the honorable sport of Curling.