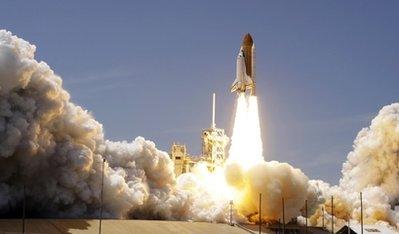 Space shuttle Atlantis lifts-off from the Kennedy Space Center at Cape Canaveral, Friday May 14, 2010. Atlantis' 12-day mission will deliver a Russian built storage and docking module to the International Space Station. Upon its return, however, the shuttle will be ticketed by state trooper Elmond Collier for excessive emissions and a vehicle noise violation. "The driver refused to return to the docking station when I turned on my patrol car's lights," Collier stated, "and may also face failure to yield to an officer of the peace." Collier also pointed out that the vehicle did not appear to have a license plate and that proof of insurance would be an issue when the shuttle lands in two weeks. (Associated Press)