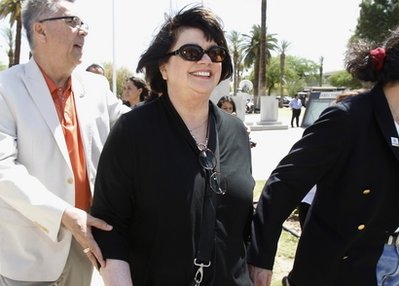 Singer and activist Linda Ronstadt, center, who is an Arizona resident, attends news conference where it was announced that The National Coalition of Latino Clergy and Christian Leaders, with the support of several other activist groups, had filed a lawsuit seeking an injunction preventing authorities from enforcing the new Arizona immigration law at the Arizona Capitol Thursday, April 29, 2010, in Phoenix. Ronstadt is neither Latino nor Christian but expressed interest in joining the group because she has "become tired of the gay rights scene."