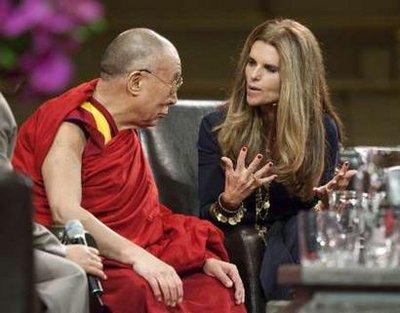 Exiled Tibetan spiritual leader, the Dalai Lama, and Maria Shriver, wife of California Governor Arnold Schwarzenegger, talk during a presentation called 'Women and Peace Building' held in Vancouver, British Columbia September 29, 2009. Shriver, who appears to be a living dead person, reportedly asked the Dalai Lama how he appears to be far less undead than her despite being much older. (REUTERS)