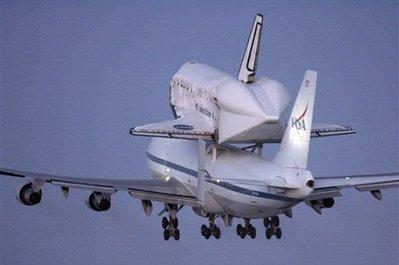 The space shuttle Discovery, mounted atop a modified Boeing 747 shuttle carrier, lifts off from Edwards Air Force Base, California, on Sunday, September 20, 2009. The space shuttle Discovery is on a cross-country flight to Florida following drastic budget cuts at NASA. Astronauts are expected to eat at least two meals and use the bathroom during the eight-hour, regular-gravity trip before returning to earth later that day. No other experiments or activities are planned during the short mission.