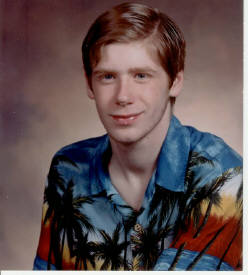 Rockwood, ME (AP) - Lonny Vogles legally changed his birthday today in the Rockwood courthouse after complaining to relatives and friends of being "gypped" seventeen years in a row on his Dec 28 birthdate.

"I always get a present wrapped in Christmas paper with the Santa scribbled through on the tag, and Happy Birthday written in place, " states Vogles. "I just want to have a birthday like everyone else with separate presents and everything."

Lonny's parents were killed in a freak emu racing accident last June and he has been living with his legal guardian and uncle, Frans Vogle. "I guess I just never thought about his feelings when I gave him his birthday present this year, I guess this was the last straw, " said Frans while glancing at Lonny. "After he threw his renewable battery charger against the wall and began crying, I felt pretty sorry for him so we went straight down to the courthouse to see what we could do for him."

Minnie Alcorn of the Rockwood courthouse had never seen anything like it, "I didn't have the faintest idea of what form to actually use, so thinking quickly, I grabbed the name change form and wrote down what he wanted." She added, "I had no idea how traumatized he was till I began marking through 'Official Name Change Form' to write 'Official Birthdate Change Form' and he collapsed in a bawling heap."

Lonny's new birthdate of August 14 was picked after careful thinking not to intercede with any true holidays. "I wanted it in the middle of a month where there was no holiday whatsoever to get mixed up with, and now I can even have a pool party!" Lonny exclaimed. Vogle has already began printing invitations for his first-ever birthday party next year, a fun-filled bash sponsored by the local Chuck E. Cheese.

Washington, DC (AP) - In a surprising unanimous decision today, the US Supreme Court declared that all bottles have the same rights and non-returnables can now be returned just like their more sought-after cousins.